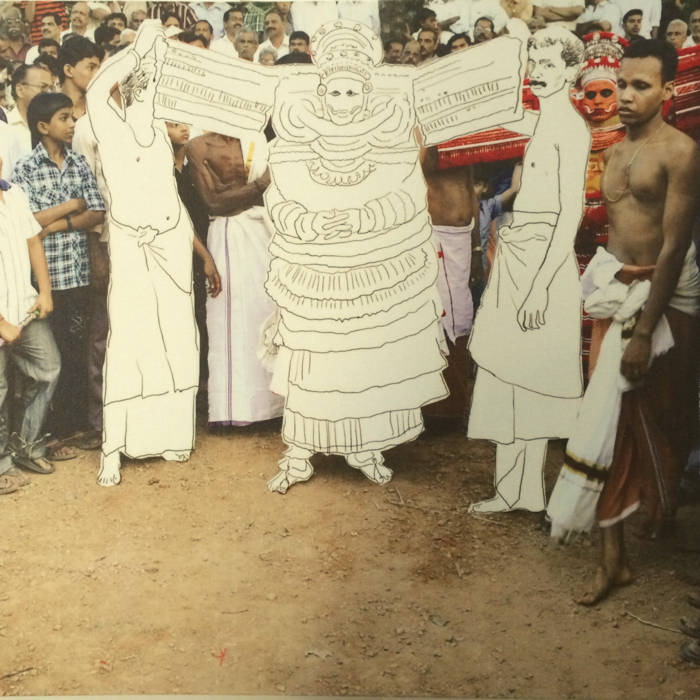 In December 2014 my artistic collaborator, Dhanaraj Keezhara and I mounted the first of three exhibitions to date, exploring the Folkloric Hindu Festival of Theyyam. The exhibit entitled Everyday Life: A Repertoire of Ritual and Performance, in Kannur, Kerala, at the Indian Medical Association Hall, commonly referred to as IMA Hall.

Many of the community members from Keezhara made their way to the exhibition throughout the week, including several of the Theyyam artists. The focus of my contribution to the exhibition was to create a soundscape that deepened the work that Dhanaraj had created. His focus on the marginalization of the lower caste members of his community, the role Theyyam holds within Keezhara, and the role Theyyam families play in this festival, were the motivations behind much of his work.

Theyyam is a bright, colorful festival that is often highlighted on the front of travel guides to Southern India, and Dhanaraj’s focus was to bring attention to the real people behind the masques, who live their lives in service to this religious festival.

My focus and intention was to create a soundscape that helped to draw attention to the themes of Dhanaraj’s work by communicating our ideas and concerns about caste marginalization through sound.

Bandcamp Daily  your guide to the world of Bandcamp